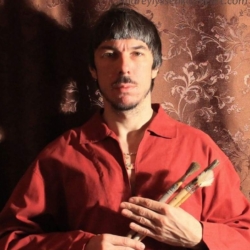 Continuity of painting traditions, permanent developing of new creative ideas and intense exhibiting activity are a source of vigor for painter’s creation of new artworks. A special place in Andrey Lyssenko art is taken by historical and religiously philosophical painting theme. Synthesis of this rare genre combined with impressionistic landscape painting, still life and portraits open to the Art world the personality of artist Andrey Lyssenko.

Diploma of the International Foundation "Cultural heritage" "For the development of international cultural relations." 2009, 2010.
Diploma of the Russian Academy of Arts, International Association of Artists, the Artist's Union "For the contribution to the arts." Thanks for the picture of the "Russian writer N. Gogol in Italy. " 2009.
In 2014 Andrey Lyssenko was awarded of Status of Corresponding Member of International Academy of Culture and Art. The Academy (I.A.C.A.) thus noted his achievements for the development of fine arts and international cultural relations.
Silver Order “Service for Arts” by International Academy of Culture and Art. 2014.
In 2017 was awarded of status Officer of Mondial Art Academia and Ambassador of Academia in Russia
In 2019 Andrey Lyssenko was awarded Golden Medal of Mondial Art Academia in nomination «figurative composition».