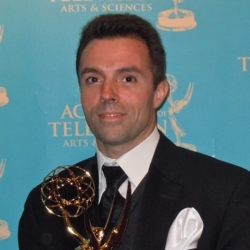 Christophe Vacher
L’état de ce compte est Approuvés
Vacher
Christophe
25 Juil 1966
États-Unis d’Amérique
Acrylique, Art Digital, Peinture à l'huile
cvacher@gmx.com
818-445-7407
http://www.vacherartspace.com
Christophe Vacher is a two-time Emmy Award Winner and two-time Annie Award Nominee who has worked for the Animation industry and most major Hollywood Studios since 1989 as a painter, designer and Art Director.
His credits include numerous movies such as The Hunchback of Notre-Dame, Tarzan, Fantasia 2000, Dinosaur, Treasure Planet, Shark Tale, Enchanted, “9”, Despicable Me and the animated series Transformers and Jurassic World: Camp Cretaceous.
Originally French, he has been living in California since 1996.
He has been exhibiting his personal artworks in many groups and solo shows throughout Europe and the US since 1989, and has given Art lectures at numerous schools, universities and cultural centers, including the San Francisco Academy of Arts, the University of California in Berkeley and the California State University of Northridge.

The artistic style of Christophe’s personal work takes its roots in Contemporary Imaginative Realism, drawing his inspiration from a wide variety of great classical painting movements, such as the European Symbolists, Art Nouveau and Art Deco, the Hudson River School, The American Realists, The Romantics and more contemporary artists like Sandorfi, Beksinski, Ugarte or the French Visionnaires movement in France from the 90s.
His imagery revolves around unchanging, timeless symbolic themes that resonate through the past, present and future of the human odyssey, and in which polished craftsmanship and imagination often prevail.

Too many to put in such a limited space, but here are a few:

The Group of painters "Visionirique étrange" invited me to exhibit with them at the salon "Comparaisons" next month (February) in Paris, France, and I regularly participate in the IGOR (International Guild Of Realism) salons as well.
Furthermore, I just signed a 5-year contract with Bill Wyland Galleries in Hawaii and will have a one man show there soon.