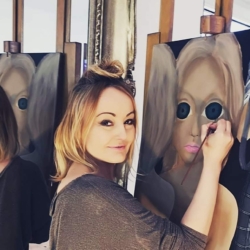 Estera Parysz-Mroczkowska
L’état de ce compte est Approuvés
Parysz-Mroczkowska
Estera
Pologne
estera_art@op.pl
+48 517 804 144
Estera Parysz-Mroczkowska was born in beautiful Polish mountains in the subcarpathian region. Creates and lives in Poland in a seaside city of Koszalin. Raised in an artistic family: the mother, a conservator, dedicated herself entirely to the restoration of churches, and the father is a glass sculptor and a multiple international prize winner. In spite of artistic background and being engulfed in art since childhood Estera chose a different walk of life, not related to art.

Only in 2018, by a complete accident, she started her artistic life after being given her first easel and paint. Afterwards, her dormant artistic genes inherited from her parents woke up with a start. After a couple of first paintings, in spite of the fact that she was self-taught and without enough experience in the history of art, she conceived intuitively her own unique style, instinctively aware of what she wants to tell the world and who is the addressee of her works.

Since the very beginning she has been committed to the idea of showing only the truth and to get to people’s hearts and change their perception of the world as well as to make them more sensitive to the ever-present suffering which is so characteristic of the world of today. Her emphatic attitude allows her to paint in a way which enables her to get to the heart of a problem and thus raise people’s awareness of the main issues of the 21st century. The principle motif in her works is a contemporary woman in all parts of the world as seen through the lens of current affairs in politics, ecology and economy.

She is no stranger to conspiracy theories, cryptozoology or cosmological theories of alien civilisations and their impact on humanity. She skilfully connects sci-fi with scientific facts and gently shows all the ‘what ifs’. Her works are in a very specific style and bear a trademark of slightly altered anatomy and big, alive-looking eyes of the characters in the pictures what creates an incredible emotional impact. Astute titles and descriptions complete the works which are thus impossible to ignore. As a result of very short artistic experience, the artist has only two events under her belt: an exhibition in Cultural Centre 105 in Koszalin in 2019 and the presence of her works among the best Polish artists in the album The Art of Polish Painting 2019.

Sleeping with the Enemy

Children of another god

The birth of Wenus XXI

Cannibals of the soul

Lost in the dark

Confession of the murderer

As a tribute to the medics